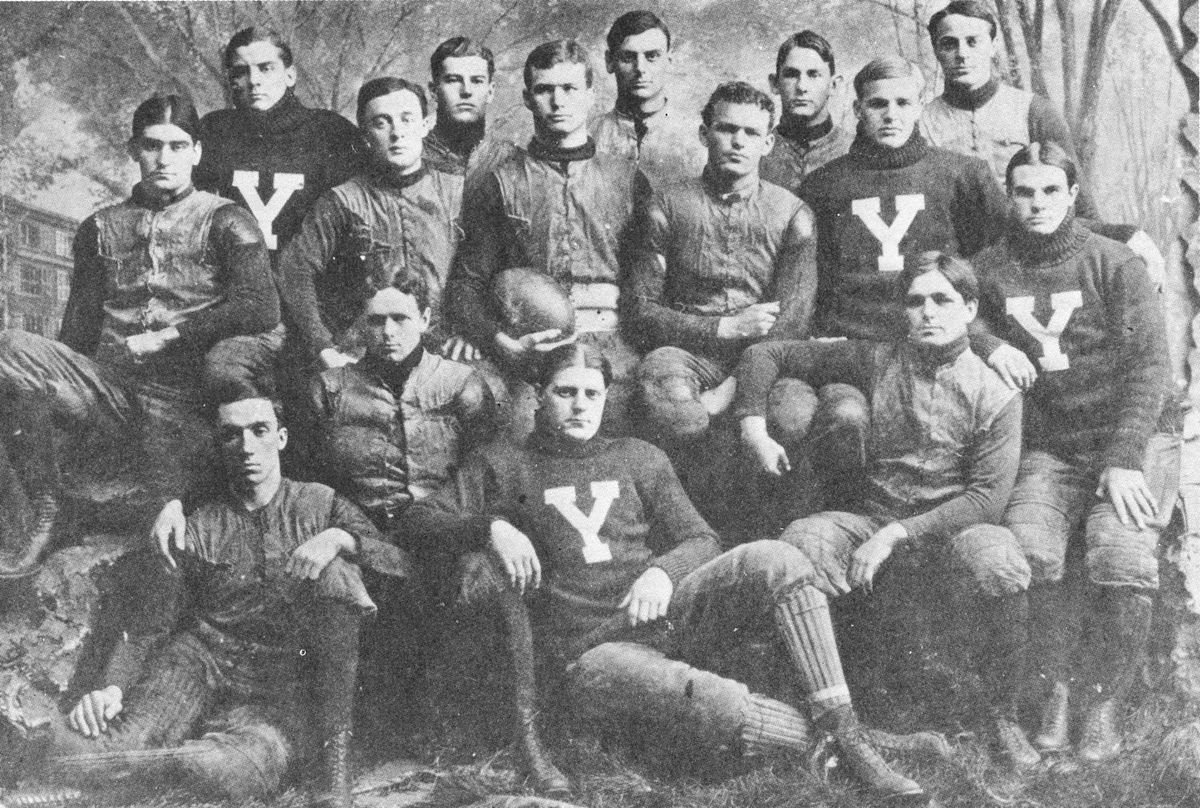 “College football began with the Northeast schools and Yale had the best athletes,” says Rich Marazzi, author of two books on the subject:

This month marks 150 years since Yale University played its first official football game, a proto-American gridiron match with elements of soccer and a best-of-seven scoring system.

BUY on Amazon- "A Bowl Full of Memories" by Rich Marazzi

On November 16, 1872, the New York Times described that inaugural header against Columbia University at Hamilton Park in New Haven:

“…Columbia’s champions were large, heavy and solid, while the Yales men were small and seemed chosen for activity and speed…But fate was against them, and Yale won the third goal, and the game, in fifty-one minutes.”

Yale came off the field with a 3-0 lead when the meet was called off due to darkness. It was the school’s only football game of the season and unbeknownst to all, the first in a long-standing athletic tradition.

Three years later, Harvard challenged Yale in a reconciliation match that blended their rugby style of play, including the oval ball, with Yale’s soccer. It was the birth of the Harvard-Yale football rivalry.

With over 900 victories on record, the Bulldogs rank in the top 10 for most wins in college football history. Their legacy includes 27 national championships, two of the first three Heisman Trophy winners, an assembly of coaching giants, and the “Father of American Football”, Walter Camp.

The most famous figure associated with Yale’s football program was President Gerald Ford, who doubled as a football coach and law student at the elite university. Ford was assistant line coach, junior varsity coach, and scout.

“Between 1872 and 1909, Yale was on Mount Olympus in regards to college football,” notes Marazzi, who also attended every Yale home game since 1965.

During that early period, decades before the Ivy League conference was launched (1956), the Yalies racked up a crushing record of 324-17-8, dominating their rivals- Harvard, Princeton, Columbia, Brown- with sweeping victories.

Inconceivable today, Yale even thrashed Syracuse, Wisconsin, Navy, and Penn State without surrendering any points. In 1899, they defeated Penn State 42-0 and in 1906, Syracuse 51-0.

As assistant-coach at Notre Dame, Knute Rockney dated modern football at his school to a faceoff against Yale in 1914, the only time the two colleges ever met. Inflicting hard lessons on the field, the Bulldogs routed the Fighting Irish 28-0.

BUY on Amazon- "The Game: Harvard, Yale, and America in 1968" by George Howe Colt

It was Walter Camp who set everything in motion for Yale and for the sport.

Camp played halfback at Yale from 1876-81 and then coached at the school from 1888-92, compiling a record of 67-2-0. But it was his vision at the rules committee of the Intercollegiate Football Association that helped transform the game to its modern shape.

John Heisman, who coached at Georgia Tech during football’s formative years and whose name is behind the Heisman Trophy, said of Camp: “What Washington was to his country, Camp was to American football: the friend, the founder, and the father.”

Camp is credited with dropping the number of players on a side from 15 to 11 and introducing the quarterback position, the line of scrimmage, the snap-back from center, and the system of downs and points.

“Walter Camp had a great record and part of the reason is that he made up the rules as he went along,” laughs Jack Siedlecki, Yale’s head football coach from 1997-2008.

A century after Camp, Siedlecki took over from legendary long-time coach, Carmen Cozza, and re-energized the blue uniforms by flipping their record from 1-9 in 1997 to 9-1 in 1999.

His most memorable game is the 1999 battle against Harvard, traditionally known as ’The Game’ and historically played as the last match on Yale’s football calendar.

“We came back from 2 touchdowns behind and won the game in the final seconds,” Siedlecki recalls fondly. The victory handed Yale their first Ivy League conference title in a decade (shared with Brown).

It was Eric Johnson, a future tight end with the San Francisco 49ers, who caught the winning touchdown to make it 24-21 with 29 seconds on the clock.

That day, the Elis filled up Yale Bowl with over 50,000 spectators, an attendance that hadn’t been reached since 1989 when Cozza took on the Crimsons in front of 59,000 fans.

The Yale Bowl stands literally and figuratively as a centerpiece in the annals of Yale football. A design marvel when it opened in 1914, its sunken playing field and sweeping unobstructed views would later serve as an architectural template for the Rose Bowl (1922) and Michigan Stadium (1927).

Marazzi points out that Yale Bowl was built because the school was losing money at its smaller field, which only held 35,000 seats.

Accommodating over 70,000 spectators, the new structure was the country’s largest sports arena and it quickly became a tourist attraction. The Bulldogs played nearly all their matches on site, which was also the preferred venue for their opponents since they benefitted from a share of the gate.

Over time, attending a football event at the Bowl became one of Connecticut’s biggest autumn traditions and the abundance of home games only deepened the shared stories and experiences.

Tales still swirl about Albie Booth, a 5’6, 144 lb. sophomore who in 1929 came off the bench to single-handedly upset Army with 3 running touchdowns.

Then there is Brian Dowling’s 66-yard pass in the final moments of the 1967 contest against Harvard, which catapulted Yale to a 24-20 victory and the Ivy League crown.

The following season, with the Bulldogs and Crimsons both undefeated going into ‘The Game’, Harvard pulled a dramatic comeback to secure a tie at Harvard Stadium. In a defiant headline, their student newspaper screamed, “Harvard Beats Yale 29-29”.

In 1972, it was Dick Jauron’s 87-yard run for the winning touchdown in the closing seconds against Columbia.

More recently in 2019, in a game for the ages, the Yalies roared back to overtake Harvard 50-43 in a double over-time thriller that followed a 17-point 4th quarter deficit.

BUY on Amazon- "Yale Football Through the Years" by Rich Marazzi

150 years after fielding their first team, the Bulldogs continue to build on their illustrious history, creating rich memories for students, alumni, and the community.

Reflecting on that tradition, Siedlecki notes, “Yale is a very unique place.”